Rethink everything you know about FM synthesis.

The opsix represents a new and expansive reimagination of classic digital synthesis. Much like Korg did when bringing wave sequencing back in a more powerful, more musical, and more immediately accessible way with wavestate, so was the approach to FM sound generation of the opsix, resulting in another incredibly flexible and unique synth.The opsix is an “altered” six-operator FM synthesizer. With its astoundingly accessible operator mixer and flexible sound engine that goes well beyond traditional FM, this instrument widens the potential of digital synthesizers to their utmost.The opsix is an instrument for players of all generations—modern in every way, getting back to the basics to offer you a glimpse of the future. Whether you are new to synths, looking for a completely unique addition to your sound palate, or an original FM purist, opsix will deliver on all expectations and more.

The opsix is a new digital synthesizer that features our newly designed six-operator sound generator. Although the instrument has a six-operator FM sound structure like classic FM synthesizers, the opsix doesn't just reproduce their sounds—it totally reimagines them! With a diversity of waveforms, operator modes that go beyond the realm of FM, and a filter that brings together a fusion of subtractive synthesis, opsix makes tames complexities of FM so that you can focus on exploring sounds instead of programming them. Simply put, opsix offers the editing simplicity of analog synths to control the power of arguably the deepest type of digital synthesis.

FM exploration, easier than ever

Musicians today use hardware-based digital synthesizers to achieve a level of operability that just cannot be found with software-based instruments. The six sets of knobs and sliders on the opsix panel, as well as the operator mixer, are symbolic of this fact. Korg’s volca FM was the first FM reimagination that helped to bring the most dynamic parameters of FM to the surface, and we expand upon that with opsix’s workflow.

The knobs and sliders with two-colored LEDs on the opsix let you quickly and clearly see the relationships between operators, whose roles change with each algorithm. This lets you make direct changes to the pitch and volume for carriers, and to the brightness of the sound or the strength of the harmonics for the modulators. These controls give you sonic control over the unpredictability of FM just by subtracting and adding sounds as if you were using a mixer or drawbars!

To add to the six operator mixers, the opsix features several knobs on the right side of the panel. Use the six DATA ENTRY knobs for full editing without minimizing or summarizing any information. Taking a look at these controls, you might think back to the days when traditional FM synths were more difficult to operate. Back then, you had to move through massive numbers of pages, and couldn’t figure out where you were in the overall scheme of things. Rest easy—with the opsix, we’ve taken away these worries. You can now edit without getting lost, thanks to the combination of six graphical parameters on the large OLED display at the center, and the rotary encoders.

The HOME/ALGO page is the starting page for everything on the opsix, and features major parameters including algorithms, EGs, and effects. Use this page with the operator mixer to get started with everything you need to do.

Of course, the opsix is a collection of everything appealing about FM synthesis... but that’s not all. Aside from sine waves, the opsix offers an expanded list of diverse waveforms in pursuit of sounds with even more complex harmonics, which can also be used as a subtractive synth offering simple filtering.

Operator modes on the opsix are used to generate sounds that are completely outside what a traditional FM sound generator can make. The operator modes let you create sounds using modulation other than FM. The opsix offers you a much wider range of sound creation, letting you combine the five operator modes (FM, ring modulation, filter, filter FM and wavefolder) and select from a wide range of waveforms. 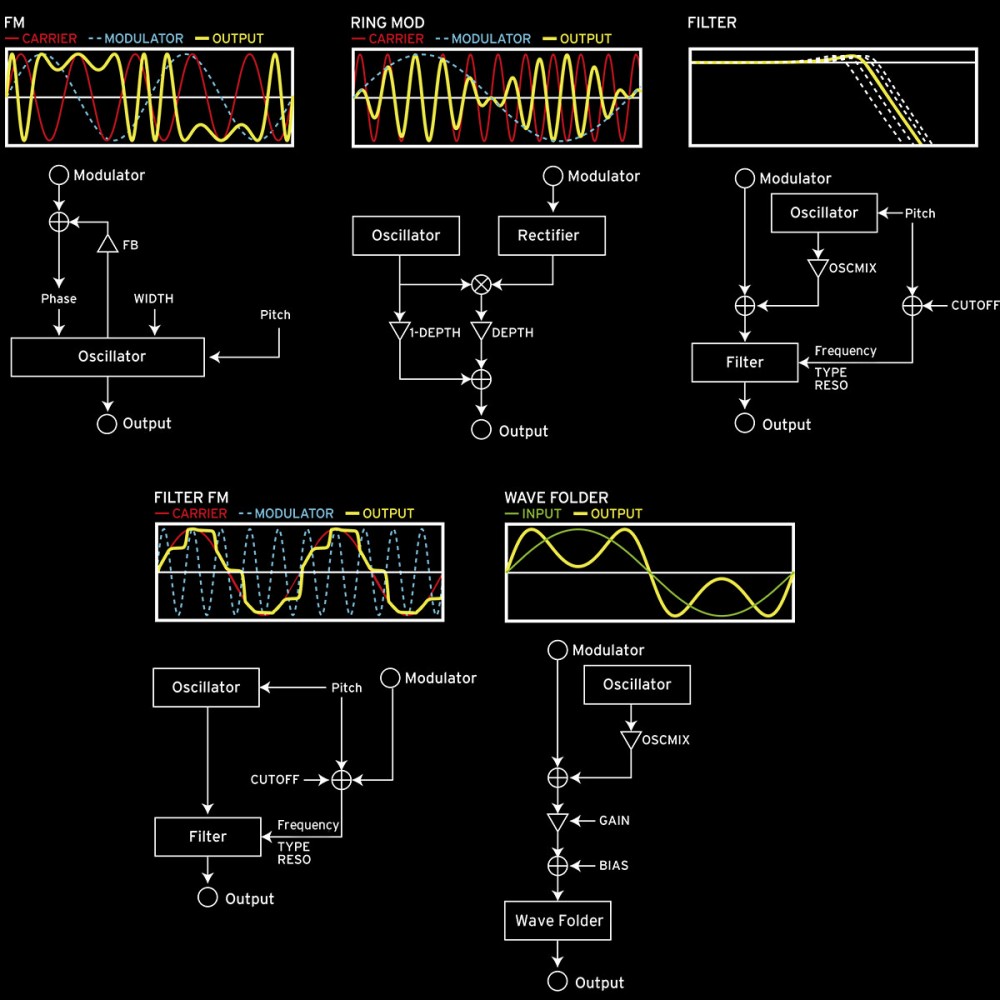 An algorithm is a combination of different operator roles and connections. The opsix goes far beyond classic FM synthesizers by offering 40 preset algorithmsand then goes on to offer a user algorithm function for exponentially greater sound possibilities which lets you construct and arrange an algorithm from scratch. 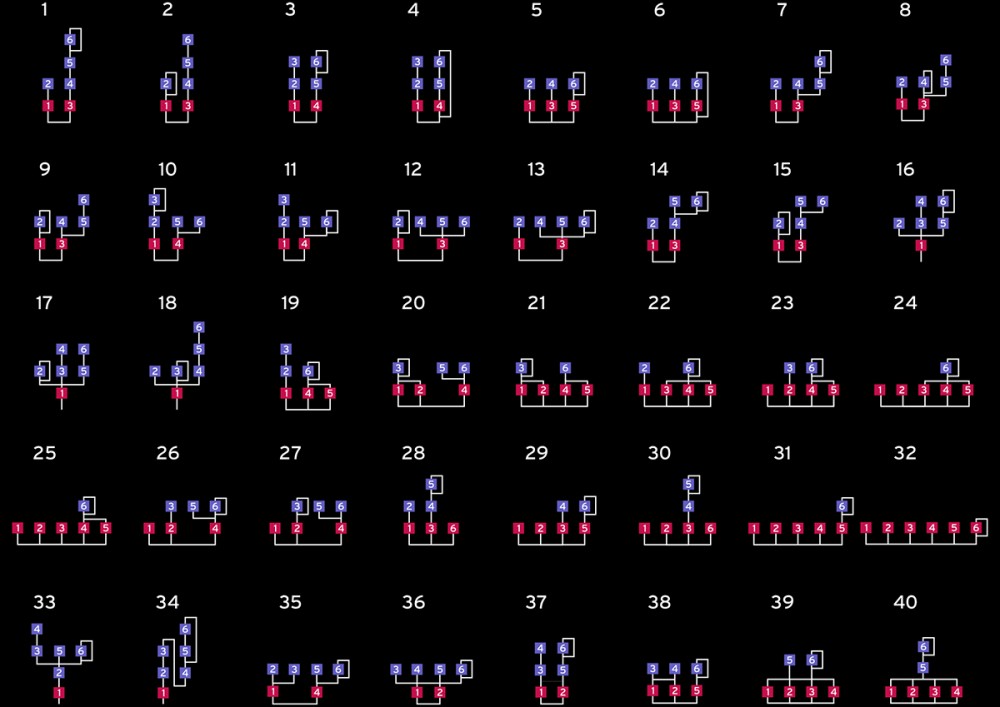 The synthesis offered by the opsix is made even more powerful with the processors that come at the end of the signal chain. The MOD section works separate from the operators, with three EGs and three LFOs; and 12 virtual patches make a wide variety of routing possible. Use these features for a huge range of modulation to create swelling or add rapid motion to your sounds.

In contrast to FM, the FILTER section follows your creation of sounds by offering analog synthesizer-like subtractive synthesis. Select from a full range of filters you want to use, from the radical MS-20 low-pass/high-pass filter, to the powerful yet soft Polysix low-pass filter that gives your sound a “vintage” feel; as well as two- or four-pole low-pass, high-pass, band-pass and band reject filters with resonance.

A treasure-trove of effects

The high-definition effects you’ll find on the opsix can be used right away in recording. The instrument offers three series (which can be used simultaneously) of 30 different effects; from including standard effects like a compressor, EQ, chorus, flanger, phaser and stereo delay, to distinctive effects like rotary speakers, grain shifters and more... as well as shimmering reverb effects that add a new dimensions to already awesome sounds.

The analyzer built into the opsix is a must-have feature for visualizing FM synthesis. It shows output levels for each frequency band, so that you can see the distribution and changes to the harmonics at a glance that are caused by modulation. The opsix also features a built-in oscilloscope that lets you check the output waveforms. The colorful changes to the sound and visual feedback are sure to draw you into a deep “synthesizer vortex”!

The 16 buttons on the bottom right-hand part of the panel glow green with the colors that evoke FM synths, while providing you with a multipurpose 16-step sequencer. With this onboard polyphonic note sequencer, you can record up to six notes per step, and edit the velocity, gate time and playback timing for each note. This lets you create long phrases or make subtle shifts in timing to emulate strums or drum rolls, something that’s not possible on a typical 16-step sequencer. Also, the motion sequencer of the opsix lets you record changes of up to six parameters, creating smooth motion changes in sound within a phrase, or building rhythms that change dramatically with each step.

While the opsix has an easy-to-use 37-note keyboard, it also features a sequencer that rivals that of grooveboxes. Just press the PLAY button—you’ll be floored by the power that this sequencer lets you unleash.

Adding unpredictability to sounds with the Randomize feature

Use the Randomize feature as found on the wavestate if you’re in the mood for unexpected sonic discoveries. Press the button marked with the die icon to generate a newly randomized sound. You can use the Randomize feature for the entire sound, or just for the operators, the algorithm or the sequences. Use the randomized sounds as-is or edit them as you like—the sky’s the limit.